One of the dilemmas that the planet must face to ensure its future sustainability is the modification of the food production system, a task in which both precision agriculture and livestock farming technologies going to be key in order to increase the production of healthy foods with minimal environmental impact.

The main advantage of the application of IoT in livestock is the improvement in the control and management of animals and their production. And although many of the published articles that address the use of these technologies are focused on cattle (the “internet of cows”), other industries, such as poultry or pig farming, can also benefit.

Thus, for the purposes of this text and in order to facilitate the understanding of the different uses that technology has in livestock, it has been decided to group the different solutions according to the benefit they pursue.

Control of environmental and physical conditions of animals.

The average consumption of meat per person has almost doubled in the last 50 years, going from eating about 23 kg in 1961 to 43 kg in 2014 and the forecasts point, in addition, to the rise of this trend, especially in countries with average incomes and low (FAO, 2011).

From an environmental point of view, these figures further threaten the fragile balance of the planet (meat production accounts for 15% of all emissions of anthropogenic origin), so it is foreseeable that the call that is being made from the community international scientific to change the current diet for another more healthy and sustainable end up taking effect (in fact, some governments are discussing creating taxes to tax the consumption of meat).

Far from being temporary, these changes in consumer habits will largely define the future of livestock. However, this conjuncture can also be read as an opportunity for IoT technologies. Not surprisingly, improving the living conditions of the animals by controlling their physical condition or the environmental variables of the breeding farms is reflected in a product of better quality and greater nutritional value.

IoT devices can help to control the health of animals, monitoring their vital signs, the miles they travel, an imminent delivery or even the right time for mating. Thus, a sensor that does not register any movement for a long time may indicate that the animal is sick or has suffered an accident.

In poultry farms, for example, devices such as Nanoenvi FARM control the environmental conditions (temperature, humidity, noise, the concentration of gases, etc.) of the enclosures in which the birds are raised. Other systems, on the other hand, are designed to control the level of water or the amount of food available to animals, automating the work of replacement.

Transport is also a task that represents a great risk for the welfare of animals, with special attention to variables such as temperature or weather conditions. They are conditioning factors that, like the breeding enclosures, can be monitored through IoT devices.

Another use of the IoT in livestock is the geolocation of cattle in real time through GPS sensors installed in collars or other devices. It is a very useful use within the extensive livestock developed in large areas of land where animals move freely. In Finland, for example, pilot projects have been carried out with this type of technology to control reindeer herds (location and also vital conditions), animals that can go up to 40 kilometers a day and are sometimes involved in traffic accidents or are attacked by predators. The experience meant a substantial saving of time spent by herders looking for herds, thus saving on fuel and labor.

Handling of meat and dairy products

The internet of things is also demonstrating its usefulness in the monitoring of the cold chain, whose maintenance is fundamental throughout the entire supply channel.

Milk, for example, is a fragile food, so maintaining its quality and nutritional properties intact from the milking phase until it reaches the consumer is paramount. Thus, the market increasingly offers more solutions to monitor all activities related to this use, controlling variables such as temperature in storage tanks, stored volume or even chemical properties of milk such as protein, lactose or fat, using an optical, conductive, flow or thermal sensors installed in the milking machine.

In summary and as Aidan Connolly, CIO of Alltech, suggests in an article published in The Poultry Site, technology in livestock, especially in the poultry industry (although some of the advantages are also extendable to other farms) could allow: 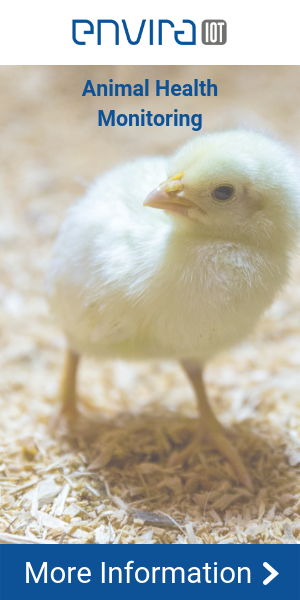