What is particulate matter? PM 2.5 and PM 10 particles

Air pollution is a mixture of particulate matter (PM) and gases that affect human health, the natural environment or buildings. According to numerous epidemiological studies, the particles suspended in the air cause the greatest damage, being in many cases responsible for thousands of deaths and causing the loss of years of healthy life, as will be shown in this article.

What is particulate matter?

Particulate matter, also called PM, refers to liquid or solid substances or compounds present in the atmosphere (1). They differ from each other, basically, by:

Size is the main classification variable, allowing grouping the different substances in:

Numerous authors distinguish an ultrafine fraction (<0.1μm) that has also been studied from a medical point of view (Fernández-Camacho et al., 2010; Araujo, 2011). However, neither the current legislation nor the recommendations of organisms such as the WHO (World Health Organization) have yet established exposure limits for particles of this size.

In the following picture, you can see the distribution in microns of various types of particles (2). 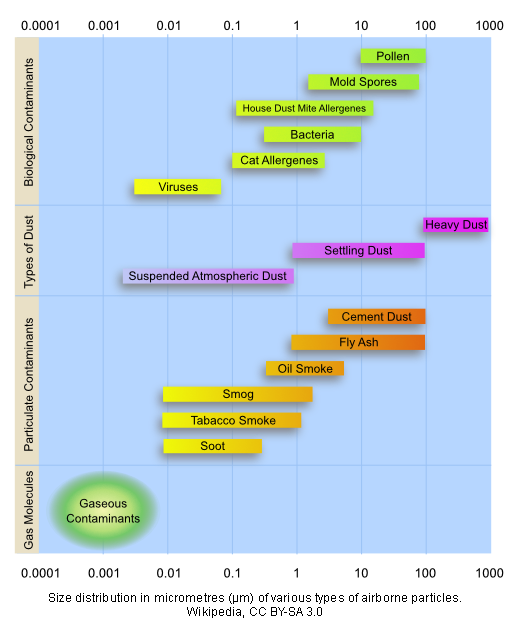 The origin of the PM

The particles can have a natural or anthropogenic origin and be emitted directly (PM10) or be subject to a series of transformations in the atmosphere (PM2.5).

Sources of natural origin include, for example, forest fires, volcanic eruptions, sand from deserts, pollen or sodium particles from seas and oceans. The particles that have their origin in human activity, by contrast, come from burning fossil fuels or industrial activities (Liang, 2013).

Traffic is an important source of generation of this type of substances. The primary particles are generated both by the burning of fuel, the use of lubricants in the engine, the wear of tires and the brake pads of vehicles (1), although some research teams point to the need to deepen these analyses. Secondary particles, on the other hand, result from the chemical reaction of the gases emitted, which acquire a solid or liquid state of easy inhalation by people.

Impact of PM10 and PM2.5 particles on human health

Several researchers have highlighted how PM10 and PM2.5 particles affect human health. Some of them suggest a direct relationship with diseases such as diabetes (Pearson, Bachireddy, Shyamprasad, Goldfine & Brownstein, 2010; He et al., 2017) or problems in fetal development (that is the reason pregnant women are considered a risk group together with the child population, the elderly and the sick people).

However, the main causes of death in the world are ischemic heart diseases, strokes and chronic obstructive pulmonary diseases (COPD), based on WHO data (3) and the Global Burden of Disease project (4). Therefore, the present epigraph will briefly describe the relationship between these particles and the mentioned diseases.

Ischemic heart disease or coronary heart disease is a disease caused by arteriosclerosis. It occurs when the arteries narrow, leading to partial or complete obstruction.

Bourdrel et al. (2017) point out the existence of studies that suggest a clear correlation and highlight an aspect to be considered: the negative effect of the particles occurs even when their concentration is below what is established by current regulations.

Strokes occur when blood vessels that carry blood to the brain are blocked by clots or other substances, such as particles in suspension. PM2.5 and ultrafine particles are large enough to be absorbed by the bloodstream, which can contribute to this type of obstructions. The studies consulted reveal some important aspects regarding the incidence of particles:

They mention the results of the Global Burden of Diseases, Injuries, and Risk Factors Study 2015, which estimates that PM2.5 particles are the fifth risk factor for global mortality.

This chronic inflammatory disease blocks the flow of air from the lungs, such as emphysema or chronic bronchitis.

Although it is a condition traditionally linked to smoking (Wen & Gao, 2018), the incidence of suspended particles is increasing, especially in developing countries. This circumstance is due to the internal pollution generated by the burning of fossil fuels for the preparation of food or the lighting and heating of the rooms (Brakema et al., 2019).

How to reduce exposure to particulate matter

Although achieving zero exposure is impossible, some strategies that aim to reduce the concentration of the particles are proving useful.

One of them is, for example, the delimitation of low emission zones (LEZ). This type of measures, some of which were described in the article on how cities face traffic-related air pollution, can be complemented with real-time air quality monitoring sensor networks, one of the key services that ENVIRA IoT offers.

The purpose of these measurements is to report the public through screens or mobile applications and to analyze whether traffic restriction policies have a positive effect on air quality.

The suspended particles are, in summary, one of the main polluting agents present in the atmosphere. Their small size means that they can be absorbed by the body, causing health problems that can manifest themselves in the form of coronary obstructions or respiratory failure. Their negative effect is verified even when the concentration is lower than the limit values ​​established in the legislation. For this reason, it is very important that Smart Cities adopt air quality monitoring measures such as those installed by ENVIRA, a strategy to take into account to reduce the approximately 7 million people who perish each year as a result of air pollution (indoors and outdoors).