Polluting suspended particles and their types

Suspended particles can be considered as a sum of solid and liquid compounds (except pure water) that float in the air. However, sedimentable particles with a diameter greater than 20 µm also tend to be included under this denomination (Viana, 2003).

Its physical characteristics, chemical composition and emission sources are analyzed in the following sections.

The size of the particles is one of the most important physical variables, being a fundamental factor in determining their degree of affection on human health. Although for its classification it is alluded to the diameter or the radius, implying that the particles have a spherical shape, Salvador (2004) recalls that it is an equivalent measure, since “in nature the particles generally have very irregular shapes.”

The classification of particles by size varies depending on the discipline of study (atmospheric sciences, epidemiology, etc.) or if the formation processes are taken into account, in which case we speak of “styles”. However, for this article and with the objective of resorting to denominations that begin to be recognized by large population groups, it has been decided to consider only the granulometric fraction used in the field of air quality, that is:

The following image shows a scheme of the human breathing system and the degree of penetration of the particles according to their size. 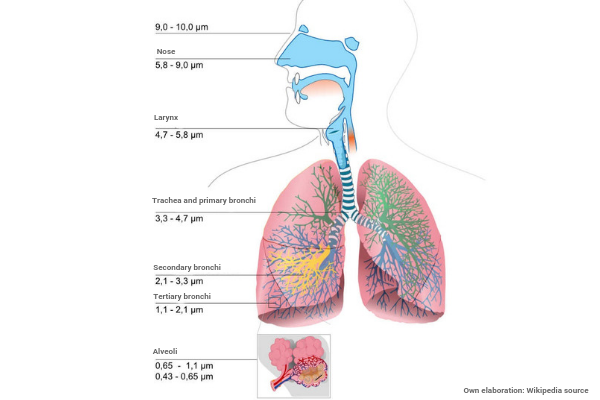 The chemical composition of the particles varies according to the emitting source, the formation process, which can have a natural or anthropogenic origin, and the mechanism, which can be primary or secondary. Thus, for example, the particles of the coastal will have a large amount of sodium chloride, while those from combustion engines will have a mixture of coal, metals and sulfates.

However, and as detailed by Mejía & Páramo (2011), a series of major and minor compounds that are listed below can be distinguished:

Regarding the impact that, considering their composition, the particles have on human health, it is worth noting a study that warns about the harmful effects that substances of metallic origin could have (Lequy et al., 2019). The research suggests that some atmospheric anthropogenic metals may be associated with excess mortality, even in areas with relatively low levels of exposure to air pollution.

Sources and mechanisms of particle formation

The particles also admit a characterization depending on the source and the formation process.

In this sense, 4 large groups can be distinguished (Salvador, 2004):

In summary and as it can be seen, the characterization of the polluting and non-polluting suspended particles varies depending on their size, chemical composition or origin. However, and regardless of their typology, they are all likely to be monitored through the air quality networks and IoT devices that ENVIRA IoT installs, configures and maintains.

– Viana, M. (2003). Levels, composition and origin of the atmospheric particulate material in the North and East sectors of the Iberian Peninsula and the Canary Islands (University of Barcelona). http://hdl.handle.net/10261/27476