Primary and secondary pollutants: these are the most dangerous

Primary pollutants and secondary pollutants can be more dangerous. The first are those that are emitted directly from a source, which can be natural (volcanic eruptions or fires, for example) or of anthropogenic origin (carbon monoxide from vehicles).

Secondary pollutants, on the other hand, are not emitted directly. Its origin lies in the interactions between the primary emissions in the atmosphere. One of the most known secondary pollutants is tropospheric ozone, whose formation and effect will be explained in the following section. 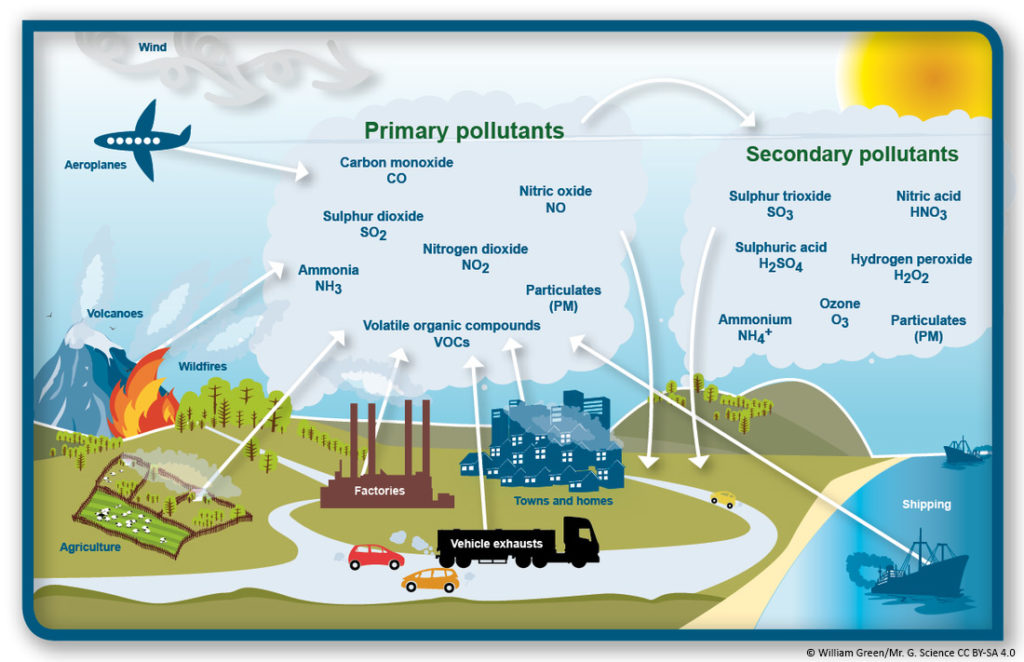 What are the most dangerous primary and secondary pollutants?

Understanding the details about how pollutants are produced, how they are transformed once they are emitted and the danger they can represent, it is important for designing minimization-oriented measures.

Primary pollutants, the beginning of the chain

The main primary pollutants and their effects are:

Secondary pollutants, when the atmosphere becomes a laboratory

As discussed in the introduction, the secondary pollutants result from the interaction of the primary pollutants once emitted into the atmosphere. Among the best-known substances, ozone and the compounds that give rise to acid rain, which will be the focus of this section.

Tropospheric ozone or “bad ozone” is formed by the interaction of various precursors (volatile organic compounds, CO, NOx, etc.) in the presence of sunlight. Unlike stratospheric ozone, which protects the planet from the ultraviolet radiation of the sun, this ozone is dangerous for human health because in high concentrations can cause respiratory problems or eye irritation. It also has a detrimental effect on the environment, damaging crops and plants, as it slows the process of photosynthesis by reducing the absorption of CO2 by the plant.

It is the main compound of smog, a type of photochemical fog in which NOx, hydrogen peroxide, particles of nitric and sulfuric acid, etc. are also found, and which is responsible for the “pollution beret” that many cities and towns show.

The process of acid contamination

Acid contamination occurs when the soil and water undergo an acidification process, that is, when the pH is below 7 (the optimum pH for most plants, for example, oscillates between 5.5 and 7.0). However, it is not an exclusive process of the natural environment, since in urbanized areas it contributes to the so-called “stone disease”, which manifests itself in the superficial erosion of buildings. This alteration is the result of the deposition in the form of acids of SOx and NOx.

Although it is a problem that has seen a visible improvement in several areas of the planet, according to a 2018 article in the New York Times, the adoption of corrective measures and their effectiveness has not developed equally. Countries such as India and monuments of world heritage such as the Taj Mahal are a faithful example of the damage caused by these compounds.