The potential shown by the different types of IoT (Internet of Things) sensors to “reinvent” and improve the way in which human beings develop their work and their own life is almost infinite.

But before describing what activities these devices are used for, it is convenient to remember what the IoT is. There is no agreed definition, but perhaps one of the most complete is that collected by Vermesan et al. in 2009:

The Internet of Things (IoT) is a dynamic global network infrastructure with configuration capability based on standard and interoperable communication protocols in which physical and virtual «things» have identities, physical attributes and virtual personalities, they use intelligent interfaces and are perfectly integrated into the information network.

In what areas can the IoT show its potential?

More applications are emerging for these devices. In fact, and as pointed out in the article on functions of the IoT sensors, part of the monitoring systems have not yet been invented.

However, there are several sectors in which the use of the internet of things has now become a common practice that increasingly provides benefits. Some of these sectors are listed in the following image:

Currently, the IoT applied in the primary sector has two main tasks:

2. Smart cities, improving the quality of life through technology

A smart city can be defined as the city that uses information and communication technologies (ICT) to improve decision making, operational efficiency, urban services and competitiveness while trying to meet current and future needs, maintaining the balance between economy, social aspects and environmental protection (3).

But the truth is that cities cannot prosper in isolation, so this concept of “intelligence” is extending little by little to the adjacent territories where urban areas get part of their resources.

How can the IoT sensors contribute to the improvement of the quality of life in these spaces? A clear example would be the monitoring of air quality, allowing the expansion of the current air quality control networks with a lower cost (4). The indicative measurements obtained by these devices would serve to feed models of air pollution prediction or act quickly in emergencies, being able to activate the corresponding protocols of action.

Monitoring the optimal performance of an industrial process is the key to avoid unscheduled stops or production delays.

This efficiency can be achieved, for example, by imbibing sensors in the machinery that measure vibrations, temperature or noise and transmit these variables to the people responsible for supervising the process. The purpose of these devices is to detect variations in the operating patterns that can be a sign of failure. The data obtained also serve to establish predictive maintenance plans, which reduces costs and improves routine maintenance.

Another benefit that can be obtained with the application of different types of sensors is a reduction in electricity consumption. For example, the installation of presence sensors helps to detect which rooms are empty and to disconnect the light or the heating and air conditioning systems.

Smart indoor stays, ensuring the health of the most vulnerable people

People spend much of their time indoors (at home, school, office, hospital, etc.) where the air conditions are not favorable. Theses atmospheres accumulate all kinds of pollutants (carbon monoxide, particles in suspension, volatile organic compounds, etc.) and depending on the time of exposure, concentration or health conditions, can lead to health problems or aggravate existing ones, such as with asthma.

Actions such as monitoring the indoor air quality in these areas are the key to achieving a healthy environment without risks.

But the sensors available in the market also allow making a more efficient use of supplies such as energy or water, making devices available to users that allow them to save money and preserve the environment.

What benefits can public administrations obtain from IoT devices? In addition to the possibility of expanding the air quality monitoring network, both through sensors located at a fixed point and installed on moving vehicles (urban bus fleets, municipal vehicles, etc.), the administration can use sensors for:

Industries, in the exercise of their activity, must assess compliance with environmental regulations, for example, adjusting their atmospheric emissions or liquid effluents to a series of legal parameters.

The IoT solutions offered by ENVIRA that allow the configuration of several types of IoT sensors for the monitoring of variables such as those mentioned, make it easier for companies to perform these regulations, thus avoiding fines, complaints from the public and reputation crises. 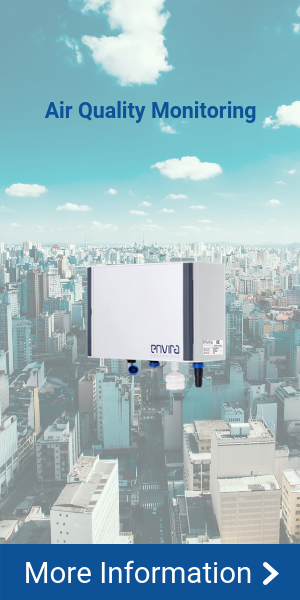